Dys4ia is a simple flash game by Anna Anthropy that reminds me of games like Loneliness, which effectively use their mechanics to tell simple, yet evocative stories. Dys4ia does much the same. Dys4ia tells the story of a MTF transgender woman undergoing the beginning of her transition. It is divided into 4 episodes, detailing a chapter of her evolution. Its story is told through creative use of mechanics, guiding a razor to trim a moustache, moving a shield to dodge the remarks of others or trying to fit a shirt onto a pixelated body, its many disparate, yet cohesive mechanics are used to great effect to tell its story. 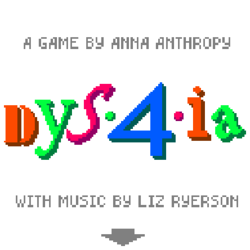 Dys4ia’s mechanically-told story is strangely evocative given the simple way it unfolds. Early stages see the player matching an odd hexomino shape into an unbefitting wall where text will read “I feel weird about my body”. The clear metaphor is her gender does not match ‘the norm’, and these motifs carry throughout the experience. In the first chapter ‘Gender Bullshit’, players will experience Anna’s anxiety through shaving her face, trying to fit in female clothes and walking by groups of men who don’t recognise she is female. Later, once on hormones, the player experience the physical and hormonal changes, such as her problematic blood pressure and the kind of hoops she must jump through to get an Oestrogen prescription. The game tells these stories through making the player actually jump through hoops, fill out intimidating questionnaires, scrubbing for an HIV test, and playing a green tentacle monster navigating a female restroom, failing the level if you’re caught.

The game’s motifs evolve in later chapters, to demonstrate the transition that is taking place in Anna’s body. The wall-matching mini game from Chapter 1 comes back in Chapter 3, but the shape is now shifting and changing colours. Anthropy now says “I feel even weirder about my body”. In the final chapter, the player experiences Anthropy’s newly-found confidence. Where a man accidentally calls her “sir” she blasts back with “MA’AM”. She can now finally fit into female clothes her mother bought for her, and her body is more feminine. The wall-matching mini game returns again as a Breakout clone using the bat to break a brick wall of gender norms or breaking the barriers to her self-acceptance. Even throughout all the chapters, the glitchy effect in the title screen and between levels is a metaphor for gender fluidity, and we see the green monster return, passing by mirrors until it sees itself as a normal woman. As the game concludes, the player controls a butterfly, representing Anna herself, flying freely into the sky.

Dys4ia tells a touching story about a complex and contentious topic in a way that is both effective and affecting. As a medium, the industry must strive to naturally diversify itself. Bioware made headlines for Mass Effect 3 by allowing homosexual romances, and for including a transgender character in Dragon Age: Inquisition. Dys4ia stands as a key component in the Industry, inspiring transgender gamers to be represented in the medium they love. The future of games looks very bright, a future where all walks of life will find acceptance in an experience that matters to them.