My Thoughts on ‘Knee Deep in the Dead’

The granddaddy of first-person shooters, Doom (1993) follows a nameless protagonist fighting solo through a base filled with demons on Phobos, one of Mars’ moons. ID Software, pioneers of the genre, created a cultural phenomenon with Doom, which lead on to inspire other shooters – and many other mediums – in both the short and long term. Many of its design principles carry over today, and all manner of shooters would do well to return to their roots closely examine why Doom  – specifically, its first episode ‘Knee Deep in the Dead’ – somehow remains interesting and ageless when so many shooters like it have been forgotten. 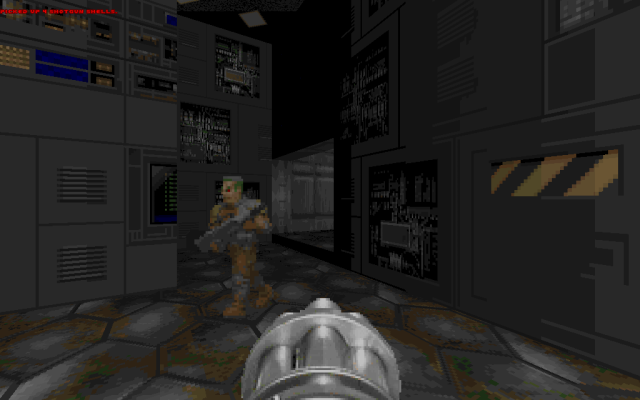 Starting E1M1, straight away I struggled with the controls. My pampered experience with modern PC shooters meant that living without WASD was agonising. It didn’t help that much of Doom’s combat relies heavily on movement. The character ‘Doomguy’ slides about the ground like he’s wearing roller skates. The lack of precision mouse movement made it tough to get started. Slowly but surely I ended up dodging attacks like a champ while gunning down waves of foes, hell yeah! 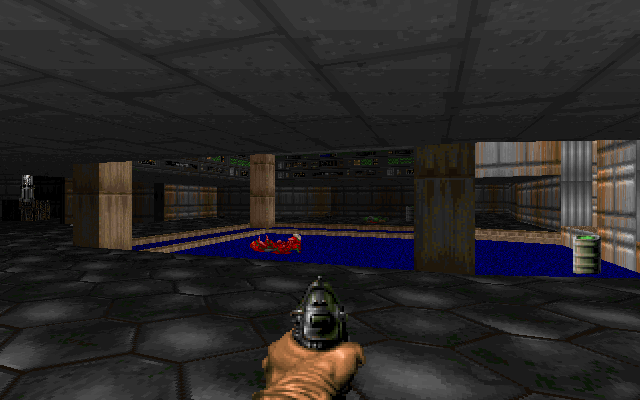 I think back to 2015 watching John Romero play ‘Knee Deep in the Dead’, and talked about the reasoning for many of the elements of his levels. And his levels definitely stood out to me – Doom’s levels are great. Doom’s levels are nonlinear, they wrap around each other and intersect like a big K-nex contraption. Secrets are surrounded by rooms overlooking them, just out of reach. Passages tease you with powerups, locked doors dominate some spaces, and enemies crowd the areas in between. Secrets are well hidden, even innocuous things like an odd texture change on a  wall can imply a secret is close by. The levels often change to reveal passages, more enemies, or secrets. Collecting a secret may cause the ground to lower into a basements crawling with foes, or walls may shift to reveal ammo, weapons and equipment.  Pressing a button can open a door elsewhere that you have been looking for the entire level. Even Doom’s primative lighting technology becomes a part of the game’s design. You may enter a room shrouded in darkness, and you must rely on the silhouettes of your enemies to see. One particular room relied on a pulsing light to see and fight its foes. It was jarring and very tense, surprising for a game so old. 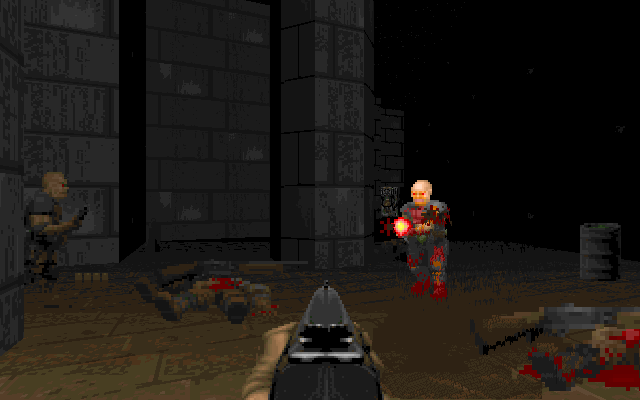 Combat in doom is where the game set itself apart. The game’s many enemies are used effectively in a variety of compositions that will keep you on your toes. Walk into a room and enemies could be in front, to either side, behind, or surrounding you. Enemies can be arranged on higher and lower ground, across canyons, or hidden behind walls and atop elevators that shift and move to reveal or disguise them. It’s rare that Doom will throw more tougher enemies at you in a linear fashion, but it will throw enemies in different places, in different rooms, with different compositions to prevent repetition and keep you on your toes. Doom utilizes environmental hazards like explosive barrels and acid pits to assist your firefights. Some rooms may be scattered with enemies and barrels where being careful shots are critical so you won’t blow yourself up. Fights with enemies can be gruelling, particularly an encounter with 2 Barons of Hell in the final level ‘Phobos Anomaly’. I got chewed up and spat out several times before I made it, even on my measly ‘Normal’ difficulty. 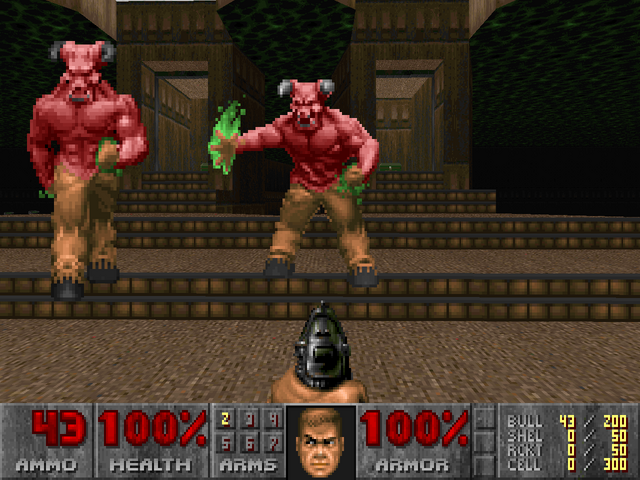 It’s easy to see why Doom’s lasted so long. It was the first, but also the best exemplar of its genre; what all FPS games ought to strive for. These days, its design is more suited to arcade shooters. its ‘run and gun’ style is replicated by games like Tribes Ascend. Even as many shooters move away from the Doom formula, where would the industry be without it? Would Half-Life, Quake, System Shock 2, or Halo be around without it?